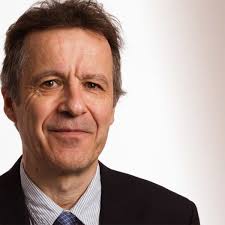 Event description
Computation and Society Colloquium and Computer Science Distinguished Speaker Series
Speaker: Bernard Chazelle, Eugene Higgins Professor of Computer Science, Princeton
Title:  Building an Algorithmic Toolkit for Out-of-Equilibrium Systems
Host: Nisheeth Vishnoi
Abstract: Algorithms research has long been preoccupied with systems that reach equilibrium: random processes should converge to stationary distributions; dynamical systems should be attracting or, at worst, periodic; algorithms should terminate and land in a “good” place; etc. Natural algorithms, those found in nature, break all of these rules. What are we to do then? Answer: Build new algorithmic tools. I will sketch some of my efforts in that direction. The talk will be aimed at a general scientific audience and will require no background knowledge.
Speaker biography:

Bernard Chazelle (graduate of École des Mines de Paris, PhD Yale) has been professor at Princeton University since 1986, where he holds the Eugene Higgins chair in Computer Science.

As Director of the NSF Center for Computational Intractability, his research focuses on algorithms and complexity. He has been a visiting professor at École Normale Supérieure (ENS) Ulm, École Polytechnique, University of Paris-Sud, and INRIA. He spent many years as a consultant for Xerox PARC, DEC SRC, NEC Research, (where he chaired the Board of Fellows) and Tsinghua University in Beijing. He is, or was, member of the Scientific Committee at ENS Ulm, École Polytechnique, and the Institut Henri Poincaré. He is also a member of the American Academy of Arts and Sciences and the European Academy of Sciences, ACM Fellow, Guggenheim Fellow, and winner of several awards from the SIAM mathematical society.

A pioneering figure in computational geometry, Bernard Chazelle is known for his resolution of a number of longstanding open questions in the field. His research has also led him to investigate the role of randomness in computing, a subject he took up in his book, The Discrepancy Method: Randomness and Complexity. In the last few years, his efforts have focused on “natural algorithms,” with the aim of building a bridge between dynamical systems and algorithms from the living world. Professor Chazelle takes pride in having taught the very first “Integrated Science” program at Princeton University, together with colleagues from physics and biology.